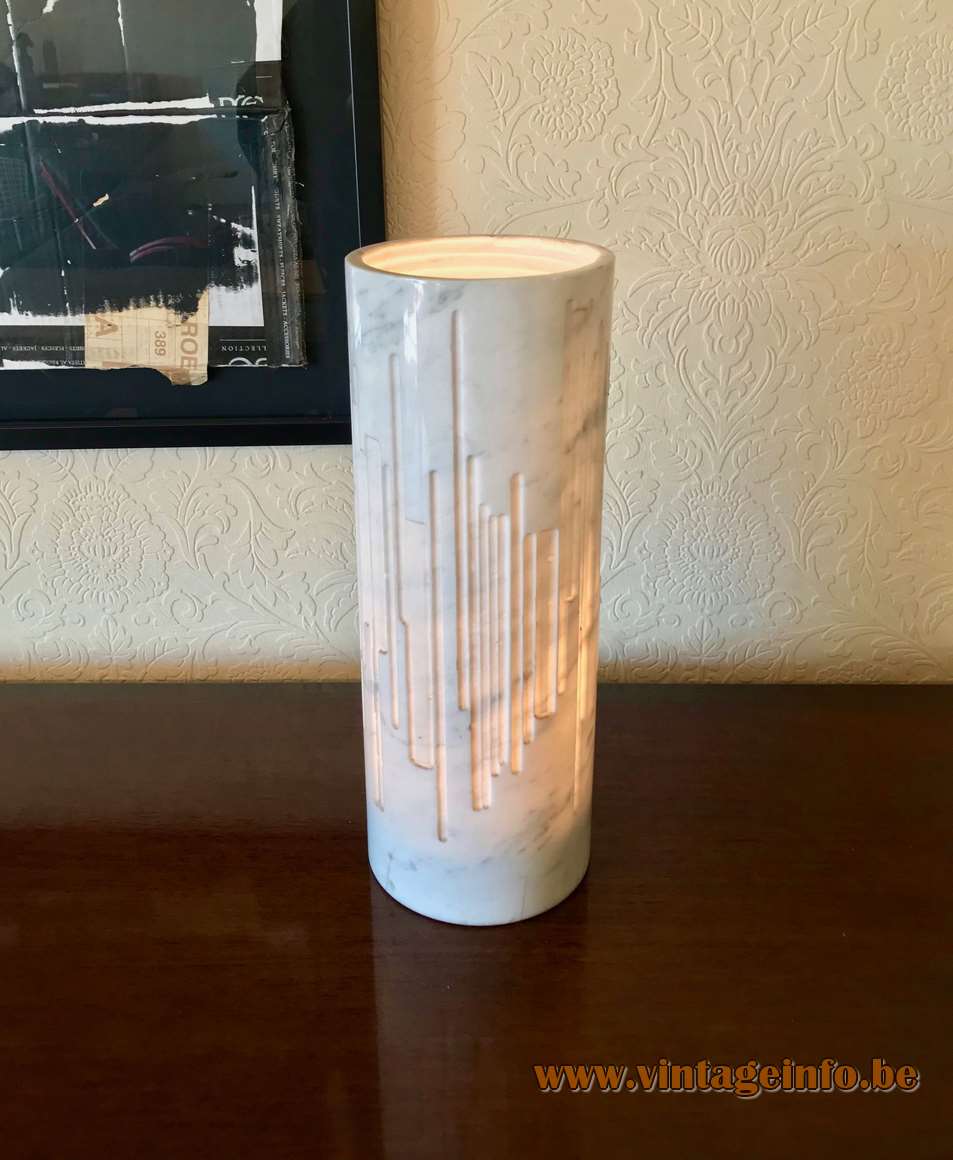 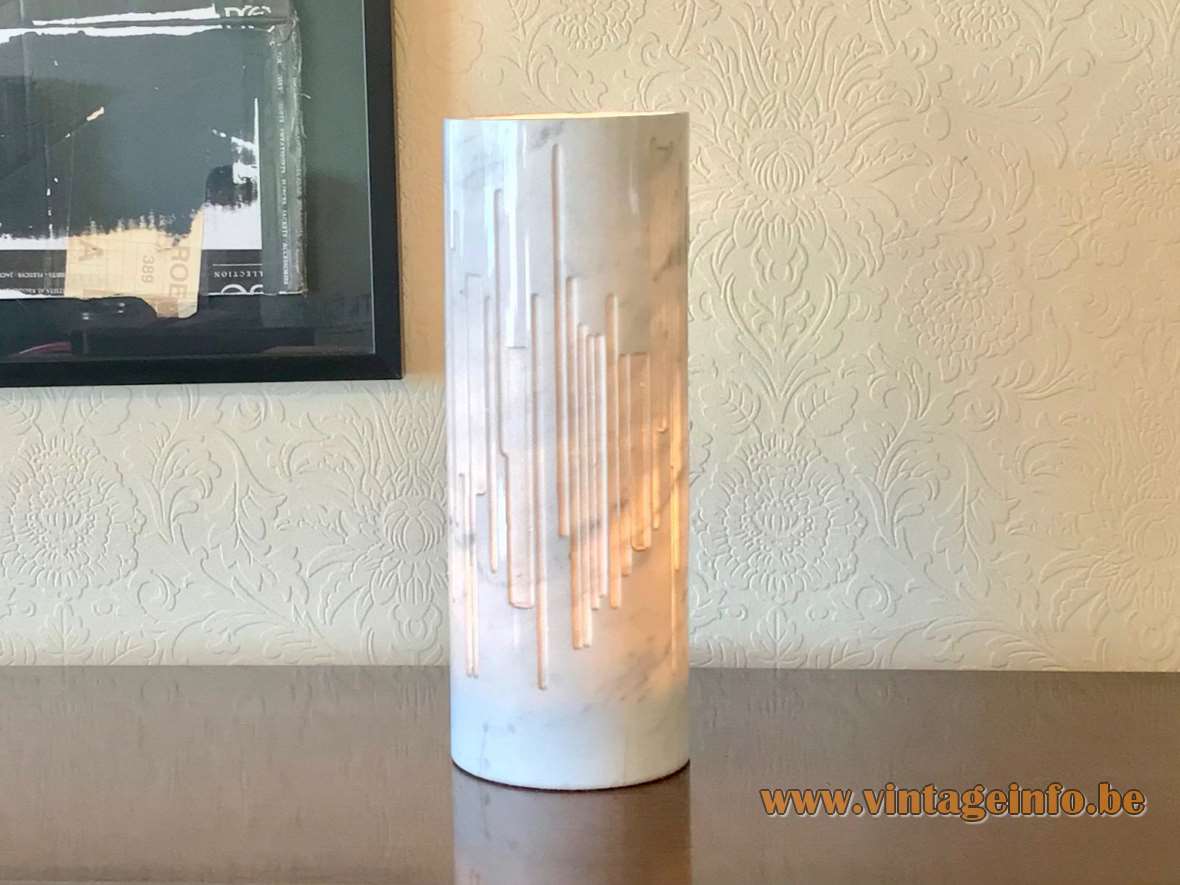 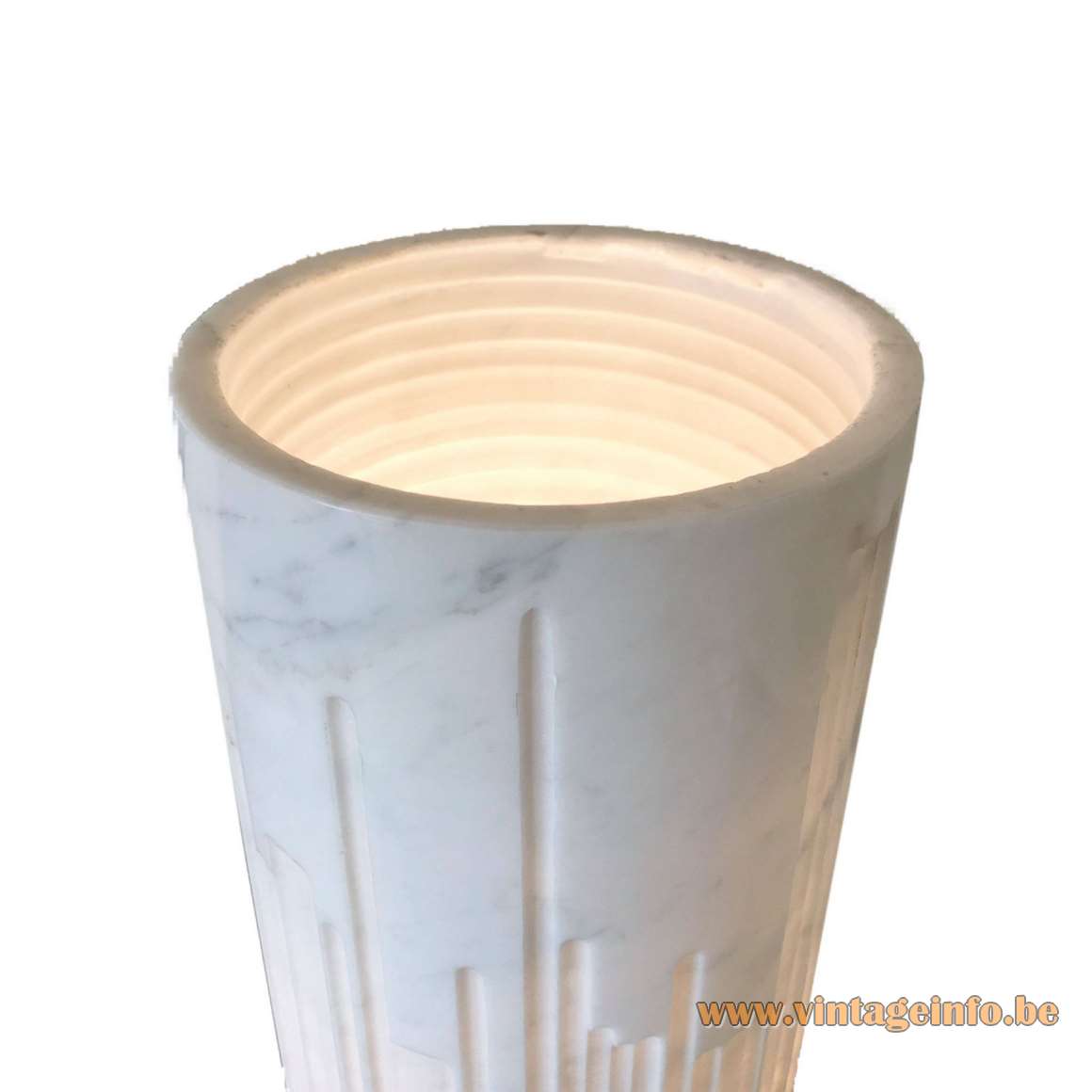 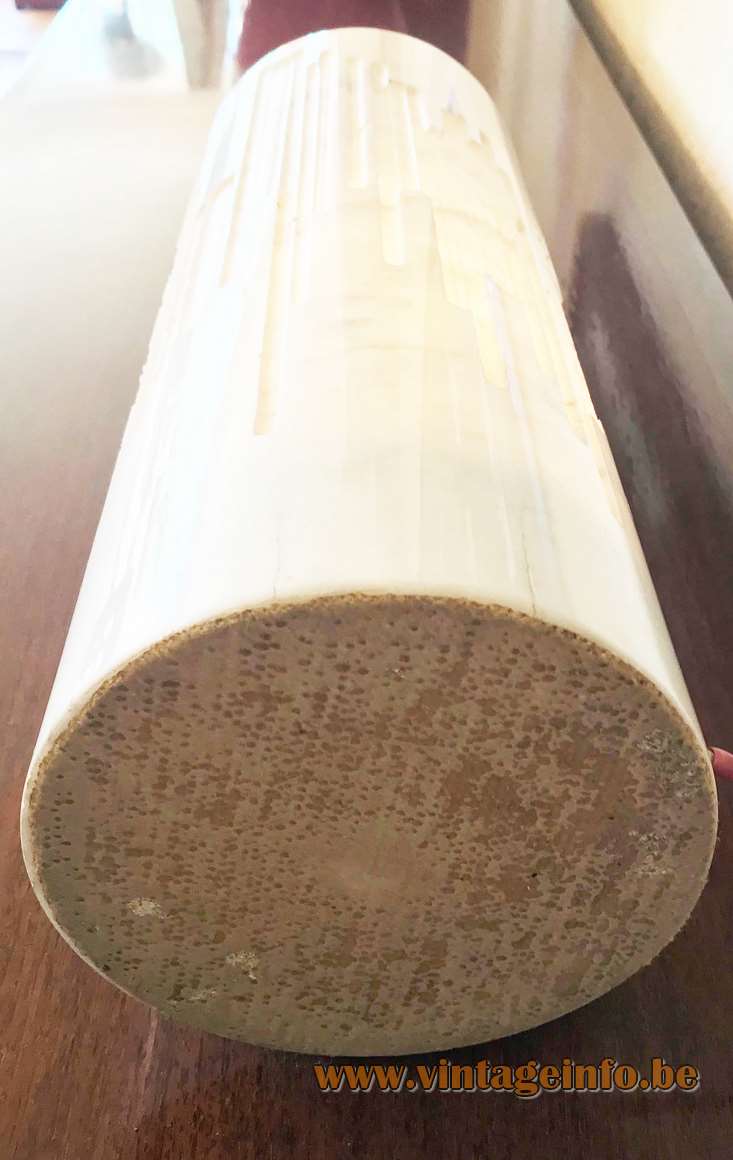 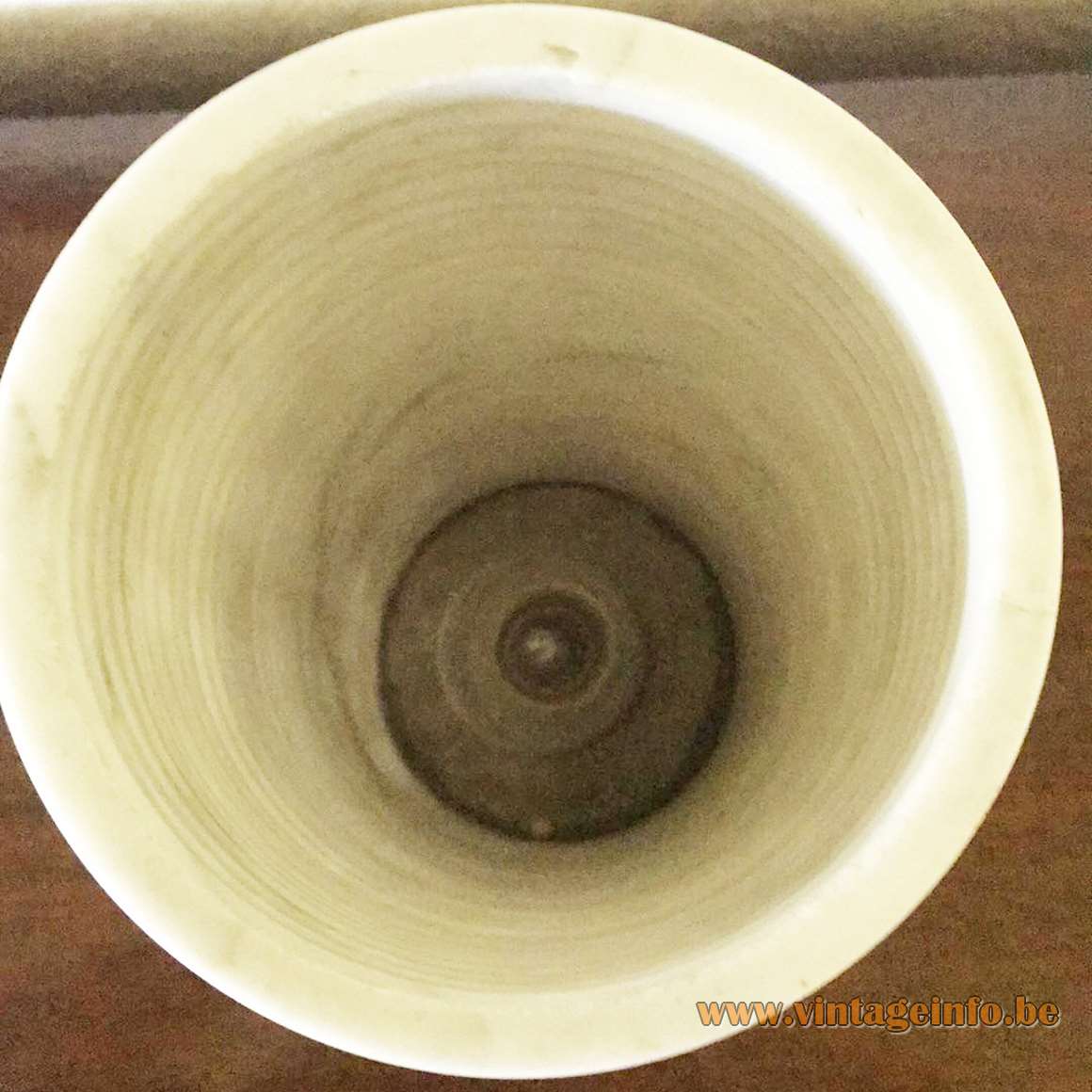 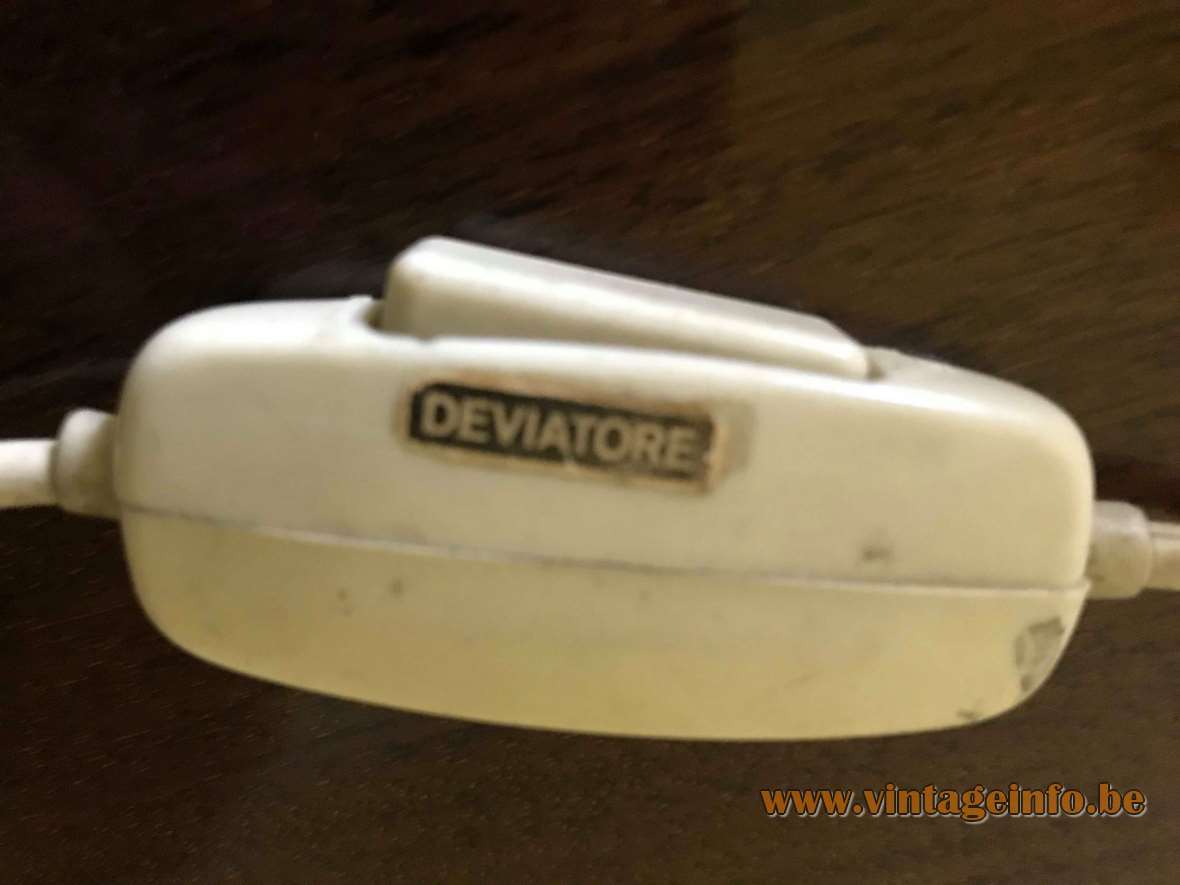 Other versions: This Grupo NP2 cylindrical marble table lamp exists only in 1 version. This Calacatta marble tube lamp is named “Elemento Luminoso” (Luminous Element) on the website of Gianni Patuzzi.

Nerone Ceccarelli (the stage name of Giovanni Ceccarelli) was born in Pisa, Italy, 31 August, 1937. He was an Italian sculptor.

In 1962 Nerone founded “Grupo NP2”, the NP2 Group, an acronym that includes the initials of Nerone Ceccarelli and Giancarlo (Gianni) Patuzzi.

Many exhibitions were organized in the USA and Canada. Boston, Chicago, Dallas, Houston, New York, Philadelphia, Miami, Los Angeles, San Francisco, Vancouver, Toronto and Montreal between 1965 and 1967. Most of the works of these years are signed by Giancarlo Patuzzi and Nerone Ceccarelli.

In 1969 the NP2 Group was awarded the “Niveau de Bronze” by the French architects’ committee. The award, conferred “for the interventions of art in architecture”, is assigned for the first time to an Italian artist.

The technical-artistic innovation of Nerone Ceccarelli is recognized internationally in 1970 by the Paris Art Committee, which gives him, together with his friend and partner Patuzzi, the Prestige du Monde Prix, the Prestige World Price.

In 1974 and 1975 Gianni Patuzzi and Piercarlo Ceccarelli left the NP2 Group. Nerone transforms the company into an individual company and named it Grupo NP2 / Nerone. He continues to operate in the sector until 1988, the year of its termination. Nerone Ceccarelli passed away in Paris, France, 7 November 1996.

All the electric parts were made by VLM Components in the 1960s, 1970s. The company was founded in 1945 in Buccinasco, a small village near Milan, Italy. The company became famous for the switches they produce since 1968, designed by Achille Castiglioni. You can find them over here.