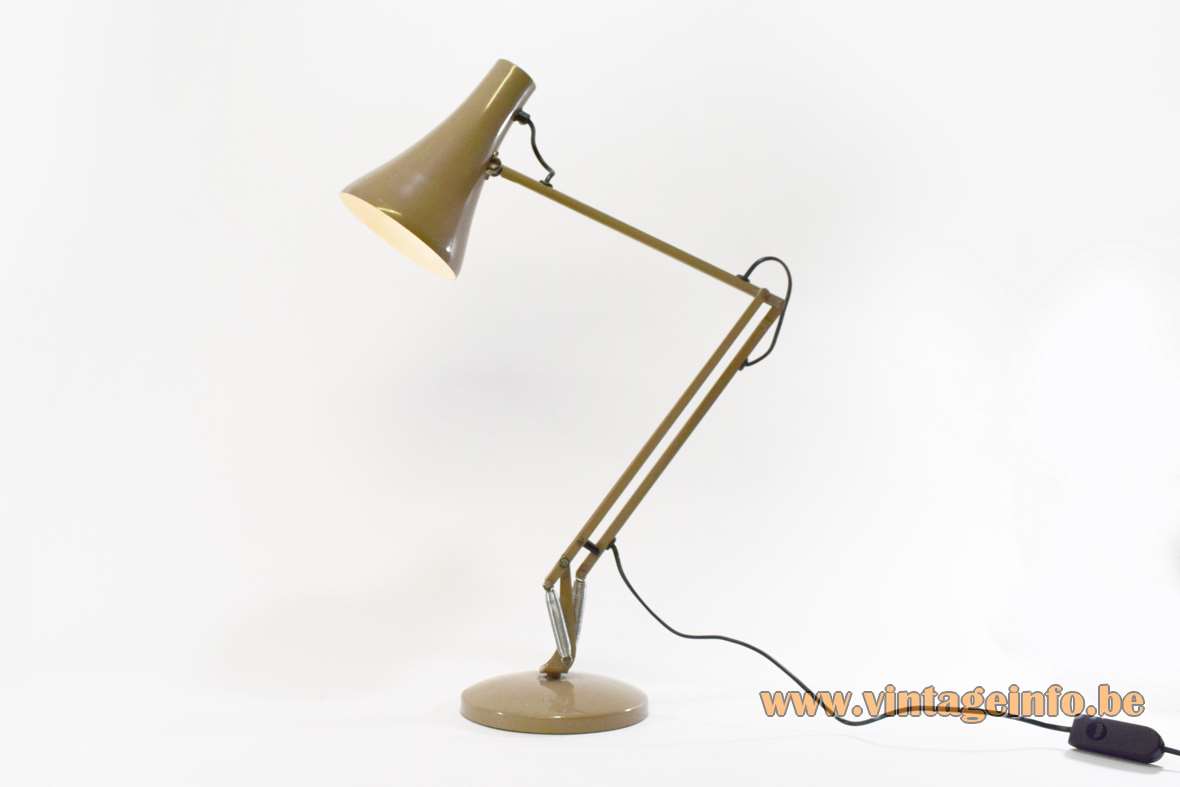 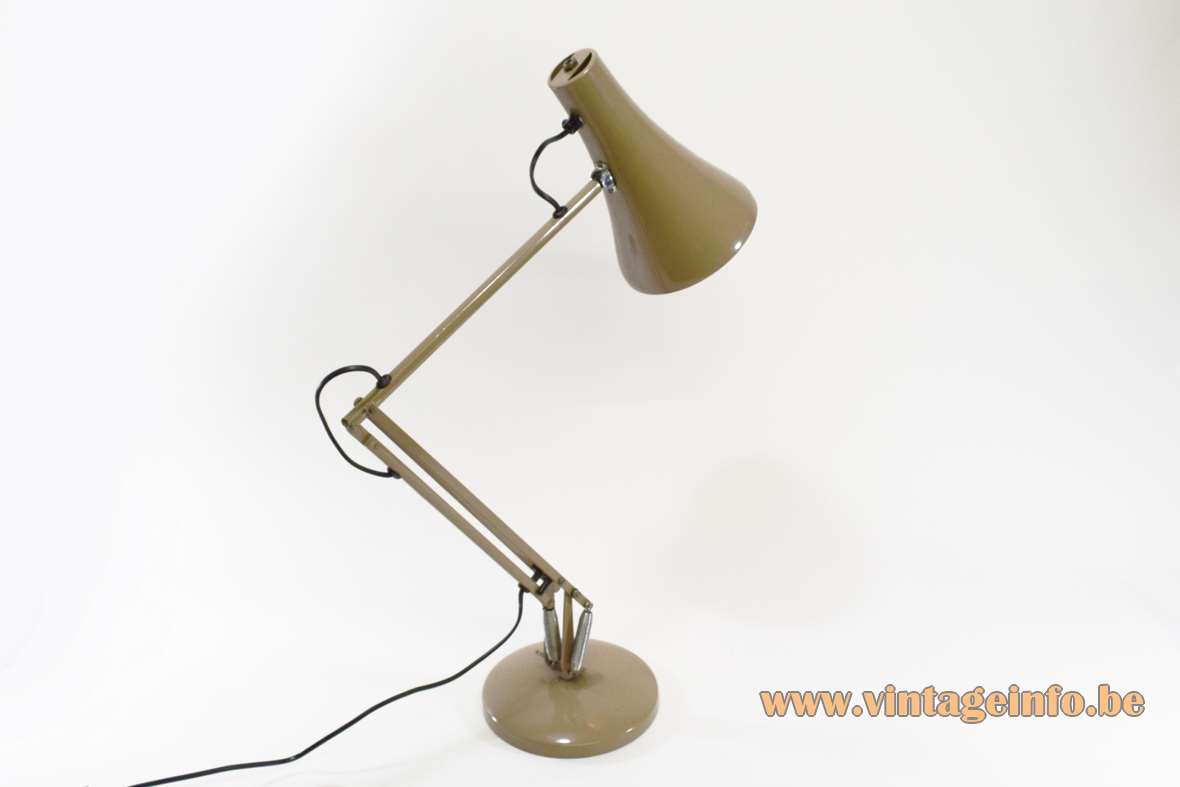 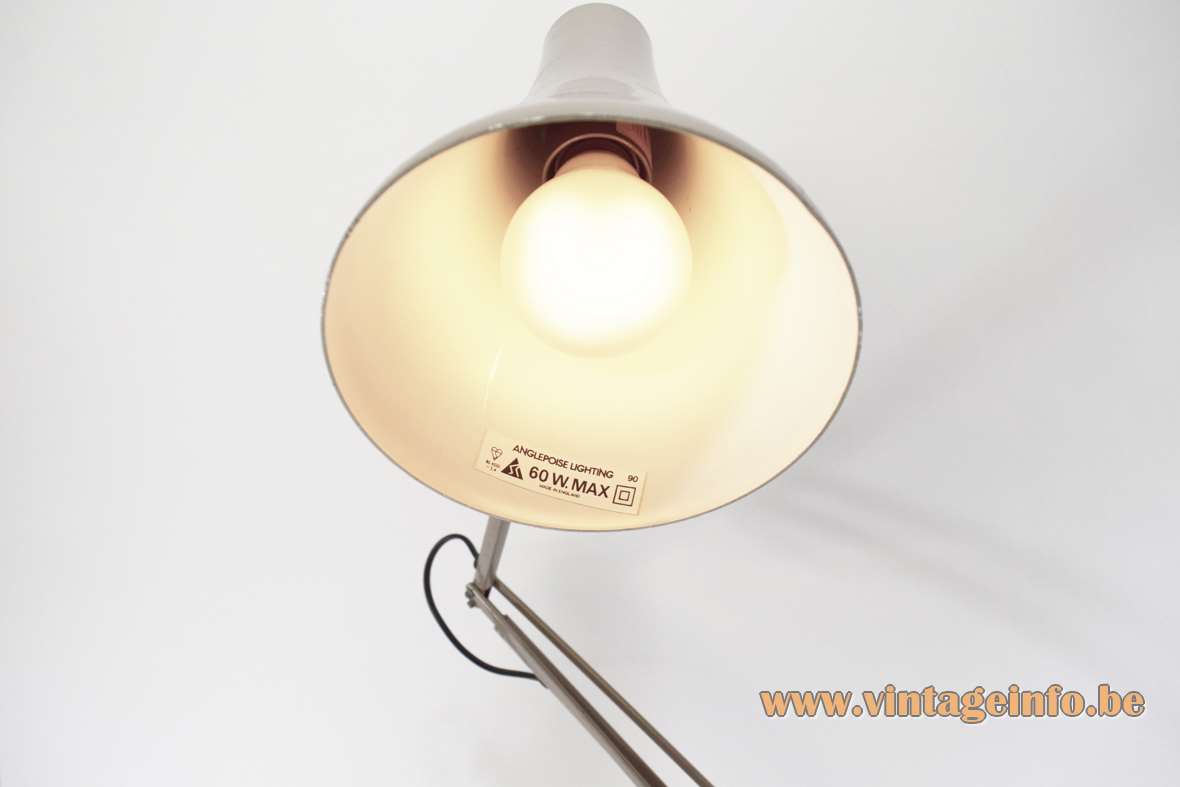 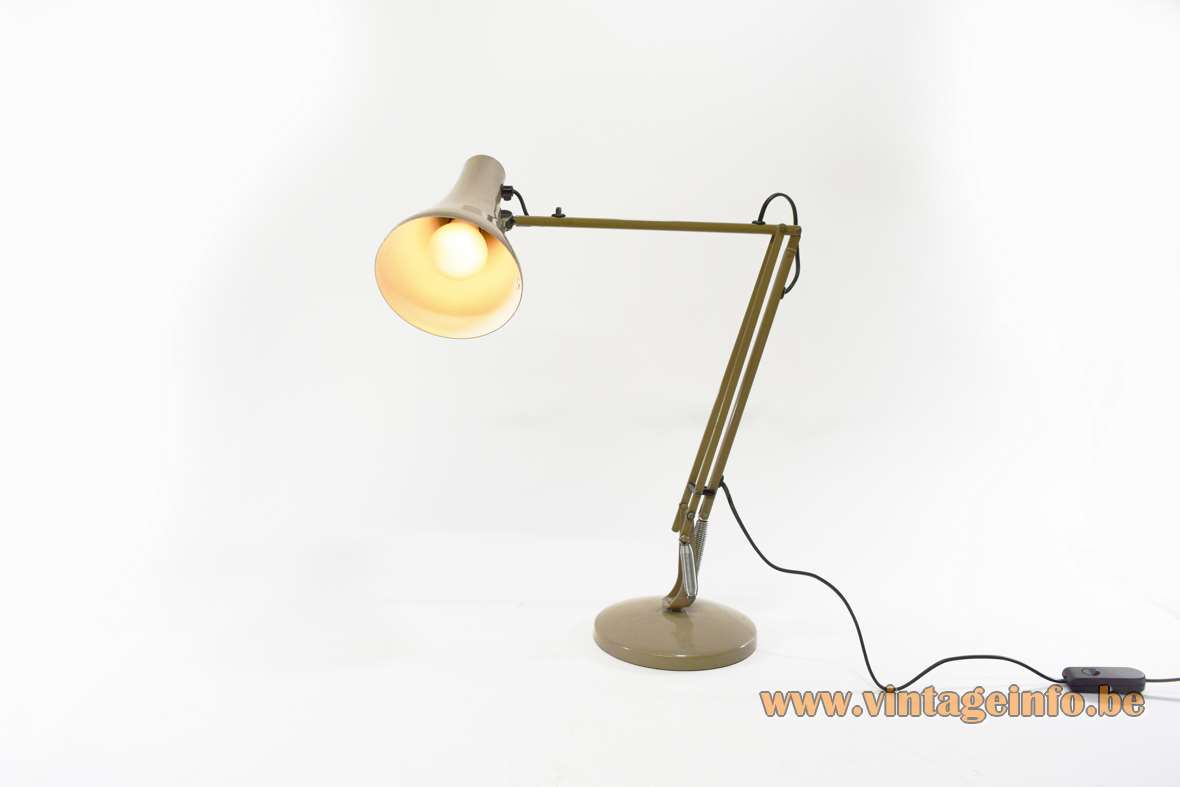 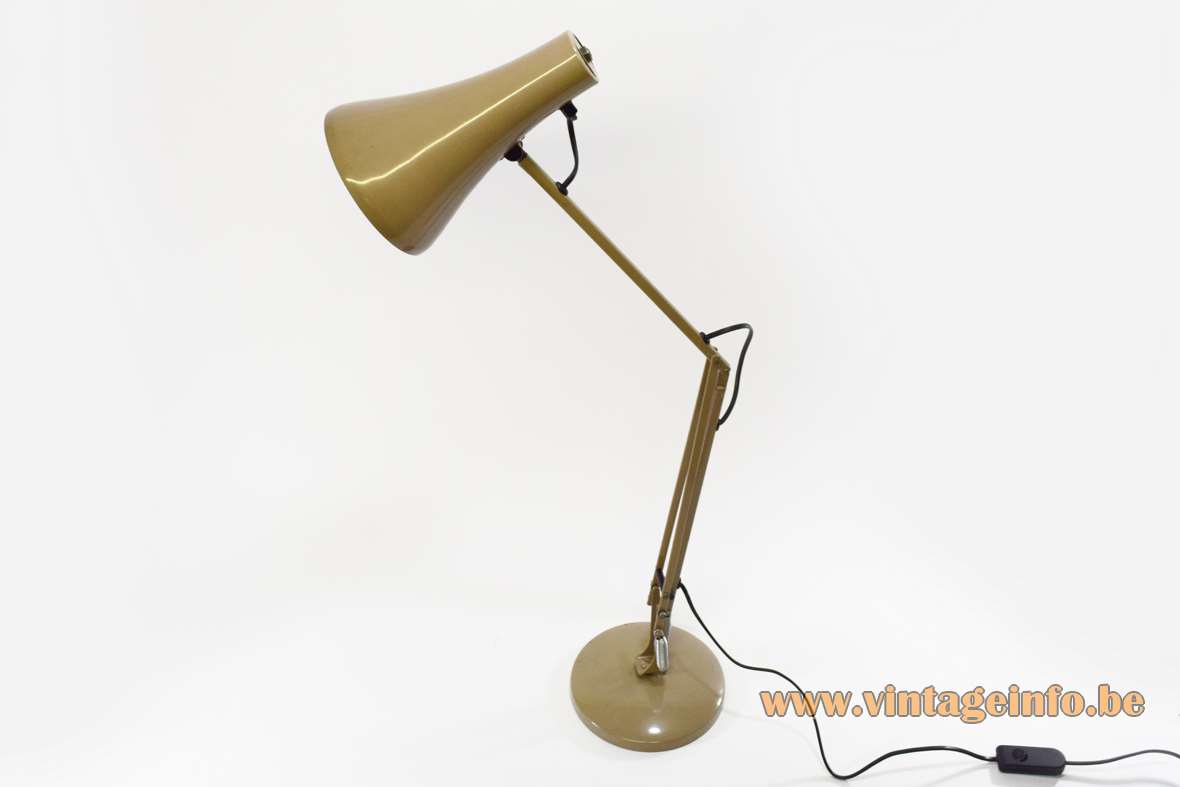 In 1977, amateur filmmaker, Peter Ryde releases ‘Wranglepoise’, a charming video short, which brings the very human characteristics of the Anglepoise lamps  into the limelight. An orange model 90 plays a prominent role.

An Anglepoise model 90 task light was used as a prop in the 1976 American British comedy film The Pink Panther Strikes Again. Starring Peter Sellers, Herbert Lom and Lesley-Anne Down.

Several Anglepoise task lights were used as a prop in the thriller/detective film Brannigan from 1975 with John Wayne and Richard Attenborough.

An Anglepoise model 1227 task light was used as a prop in the 1973 film Day Of The Jackal. Starring Edward Fox and Michael Lonsdale. 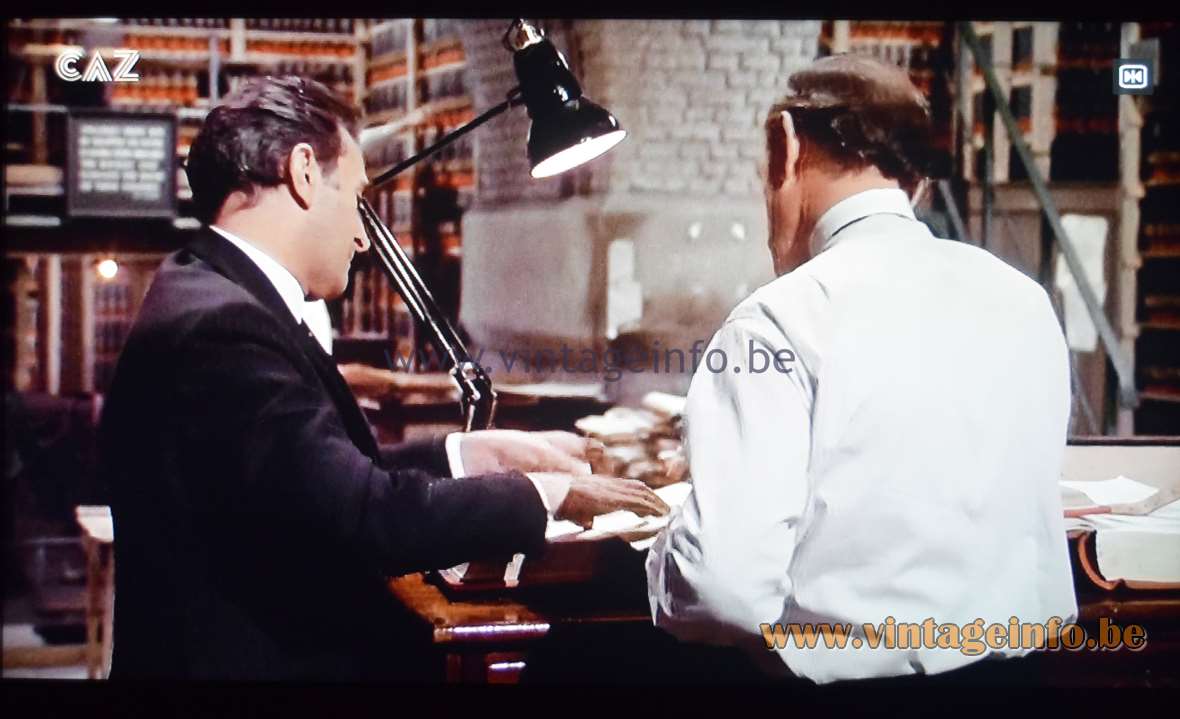 An Anglepoise model 1227 task light was used as a prop in the 1962 British comedy film Carry On Cruising. Starring Sid James, Kenneth Williams and Kenneth Connor.

Other versions: The Anglepoise model 90 task light exists in several colours. Produced with a switch on top of the lampshade and with a cord switch. The switch of this lamp was replaced by an 1990s model, unfortunately. The beige colour of this lamp was named “mushroom grey” at that time. Early versions (1973 – 1975) have the company name stamped in the metal. Later versions such as this one have a sticker in the lampshade.

The Anglepoise model 90 task light is a variation of the model 75 lamp from 1968. It came in production in 1973. The successor to this lamp was the Apex 90 in 1985. The website of Anglepoise clearly explains the differences between the models.

Family company, Herbert Terry and Sons Ltd. is established in 1855, manufacturing springs and presswork. In 1932, when vehicle suspension engineer George Carwardine (1887 – 1947) invented a spring, crank and lever mechanism that could be positioned with the lightest of touch yet would maintain its position once released, a blueprint for the first Anglepoise task lamp was born.

In 1971 Herbert Terry & Sons Ltd. was sold to the Associated Spring Corporation (today part of the Barnes group). In 1975 John Terry bought back the lighting part of the spring business to form the company Anglepoise Lighting Ltd.

The Anglepoise lamps have subsequently achieved iconic status. Over the years, the Anglepoise lamp has been developed under the careful watch of the founding Terry family, without ever losing sight of its primary function, and unique, characterful form.

From the creation of the Original 1227 lamp, to the development of extended collections by esteemed industrial product designer Sir Kenneth Grange, to recent collaborations with renowned designers Paul Smith and Margaret Howell, incomparable British design remains at the heart of this progressive British brand. 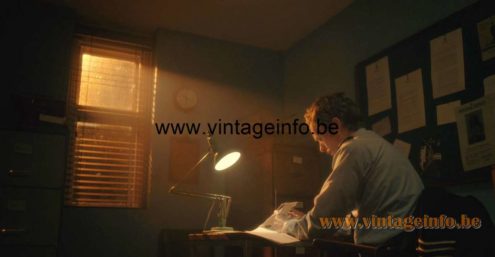 An Anglepoise model 75 task light was used as a prop in the British comedy film Take A Girl Like You from 1970. Starring Hayley Mills, Oliver Reed and Noel Harrison. 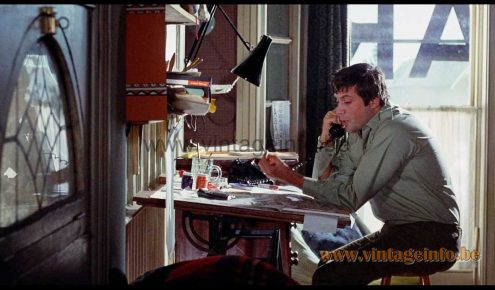 An Anglepoise model 90 task light was used as a prop in the 1984 musical drama film Give My Regards To Broad Street. Written by and starring Paul McCartney, Ringo Starr and Bryan Brown.

The Soft Boys – (I Want To Be An) Anglepoise Lamp – Discogs

Give My Regards to Broad Street – Wikipedia

Many thanks to Kathryn of Anglepoise® for the enlightening information.